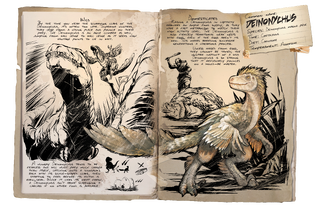 Yes
1 Adults cannot be tamed, but 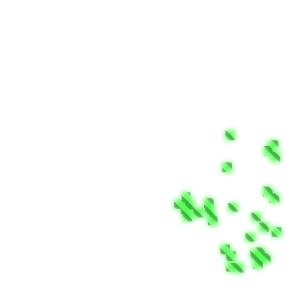 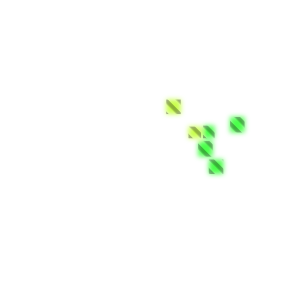 The Deinonychus (Di-NON-ih-kus), also known by Dododex's most upvoted player tip, the Cliff Chicken is a creature in ARK: Survival Evolved's Valguero DLC.

By the time you hear the scurrying claws of the Deinonychus, it's often too late. Superior hunters, they leap from a hiding place and pounce on their prey. The Deinonychus is an agile climber as well, jumping from wall ledge to wall ledge as it seeks high vantage points to lie in wait. A hungry Deinonychus tends to be fearless and will hunt prey much larger than itself, latching onto a dinosaur's back with its sickle-shaped claws, then starting to feed before its victim is even dead. While it likes its meat fresh, a Deinonychus isn't above scavenging a carcass if no other food is available.

Raising a Deinonychus in captivity requires an ample food supply, as they have a fast metabolism to match their high activity level. The Deinonychus is also fiercely territorial near nests with eggs, even if the eggs aren't its own. This makes breeding successive generations a hazardous process. Unless raised from eggs, they cannot be tamed; the hunter instinct of a wild Deinonychus is so strong that it reflexively pounces on a would-be master.

The Deinonychus is fiercely territorial in the wild. They will protect their nests against any who dare to trespass.

The Deinonychus has a similar appearance to its close relative, the

Raptor, but has plumage similar to that of the

Rock Drake. The Deinonychus has razor sharp claws useful for climbing and attacking.

The fifth region is barely visible in the game from most angles, and its photo has been adjusted for better visibility.

This section displays the Deinonychus's natural colors and regions. For demonstration, the regions below are colored red over an albino Deinonychus. The colored squares shown underneath each region's description are the colors that the Deinonychus will randomly spawn with to provide an overall range of its natural color scheme. Hover your cursor over a color to display its name and ID.

This section describes how to fight against the Deinonychus.

Rifle . Bring powerful attackers like Wyverns or Spinos, or lure Deinonychus off cliffs with a flier. If you don’t have a ranged weapon and they latch on to your mount, just smack it away as they have relatively low health.

If you are stealing eggs, then you definitely need to be prepared with a good mount because there is most likely going to be a pack of Deinonychus. It’s suggested to use a flyer so you’ll be safe. Make sure to steal the egg and then QUICKLY escape because the Deinonychus can pounce riders, which can pose a great threat as it gives time for the rest of the pack to arrive.

Deinonychus can deal a percentage damage bleed effect that scales with how big a pack is, thus high health tames may lose thousands of health instantaneously. They also have the ability to climb, but its not nearly as good as the

It is able to latch onto large creatures such as a

Brontosaurus, making them hard to hit via conventional means. To make it even more dangerous, they are able to glide upwards to latch onto a nearby ledge similar to the

Rock Drake, and pounce and attack much like the

Raptor (It can't dismount you though). They also cause a bleed effect that stacks and makes them even more dangerous. They tend to be found in groups of at least 2 or more which can make killing/getting away much harder.

While latched onto a large creature, it can mostly only attack the said creature until it releases itself out, making it extremely vulnerable to any attacks from other creatures or ranged weapons.

Trike with a decent amount of

Health can easily kill a pack or two at once. While latched they can still get hit by attacks from the one they are riding

Magmasaur, wild Deinonychus cannot be tamed, but a fertilized

Deinonychus Egg can be stolen from a nest and hatched to obtain a tamed Deinonychus. Likewise similar to the Wyvern, Rock Drake, and Magmasaur, a typical player would need to be cautious, as these theropods react very aggressively to anything stealing their eggs. Unlike the Wyvern, Rock Drake, and Magmasaur however, Deinonychus are not initially aggressive to large-class predators such as Rexes or Spinos, and these tames may be walked directly up to the nests without conflict until an egg is stolen, making them excellent options for egg theft. Deinonychus nests can be found almost everywhere the dinosaurs spawn, but perhaps the most reliable place to find and farm eggs is the small canyon region in the White Cliffs called The Paradise, which is located in the flat plains area of the cliffs, near to The Lake region. Once an egg has been acquired, the incubation temperature is between 176 and 194 degrees Fahrenheit, or 80 to 90 degrees Celsius, which can be reached through the use of various fires (14 Campfires for example), Air Conditioners, or a Dimetrodon. Once you've hatched your first Deinonychus, unlike the Wyvern, Rock Drake, and Magmasaur, the hatchlings do not require any special food source, and can be fed a standard carnivore diet straight out of the egg. Finally, similarly to the Wyverns and Magmasaurs, successive generations can be bred from tamed individuals, and mutations for higher stats may be acquired.

The nests spawn all around The Paradise in The White Cliffs, and stealing an

egg won't be very hard with some these tames:

The Deinonychus is a versatile tame capable of many unusual, but useful abilities that give it an edge in both combat and merely getting around the map. What sets it apart from many of ARK's tames is that not all of the Deinonychus' abilities are readily apparent, so it takes some practice to get used to the controls and get acquainted with its full skill set (it is, however, not quite as difficult as the

Bloodstalker to master, but the Deinonychus still has a relatively high skill ceiling compared to most tames).

Pack Screech: One of the most simple abilities it has at its disposal, that it shares with many of ARK's creatures, and one players are often quite familiar with before they get on the saddle of a Deinonychus, is its screech ability. This ability requires an 'alpha' Deinonychus to use (the highest leveled Deinonychus in a group will be designated the alpha, and will be marked by an orange glow around its head), and provides a temporary buff to speed and damage when used for itself and up to 4 other pack members who join in the screech. Sometimes, the alpha Deinonychus is still able to use its screech even when its bonded pack members are out of render distance. To trigger this ability, press the crouch button (default C,

Charge Jump: On top of the standard running and jumping controls that are familiar to most tames, the Deinonychus is one of the few tames that has a 'charge up' to its jump. While on the ground, the jump button (default Space,

) can be held before being released, which will result in a 'glide' of sorts that keeps the Deinonychus airborne longer than it would have been from just tapping the button. Combined with a running start, the Deinonychus can clear some very impressive gaps with this ability. To further aid the rider, it even has a special animation where it starts to crouch as you hold the jump button, to let you know when the leap is fully charged. If your jump misses, however, you rarely need to worry, as the Deinonychus has a unique immunity to fall damage.

Climbing: What really sets the Deinonychus apart from other tames is its unique method of climbing (which the

Ferox later emulated, but did not copy completely). The Deinonychus is capable of latching onto climbable surfaces (nearly anything vertical counts, including harvestable nodes like trees) with its claws while mid-air from a jump (it will do so automatically), and can even launch itself with targeted precision towards a climbable surface in range. Unlike most other climbers, such as the

Megalania, the Deinonychus does not climb using the movement buttons, but by tapping the jump button (default Space,

); which will cause the Deinonychus to lurch and shimmy in the direction the camera is facing, functioning like a living version of

Climbing Picks (although it cannot climb upside down like the picks can, only on vertical surfaces). The faster you press the jump button, the more quickly the Deinonychus will climb. While climbing, the Deinonychus is even capable of leaping huge distances between climbable surfaces, like a clumsy version of the

Rock Drake's launch ability. This is done the very same way the Deinonychus uses its charge jump while on the ground: by holding the jump button before releasing. The camera has to be targeting a surface that is considered climbable however, otherwise the charge-leap will fail, resulting in a normal shimmy. While latched onto a surface, if at any time you wish to detach your Deinonychus and return to the ground, merely press the crouch button (default C,

), and it will let go of whatever it is climbing on.

Special Attacks: Finally, the Deinonychus is capable of latching onto larger targets in much the same way as it climbs: by using the jump button (latch-able opponents will have a red fangs icon that lets you know they are able to be jumped onto). Once attached, the Deinonychus can perform a special attack where it bites chunks out of the latched creature (default

). Just like its primary attack, this bite attack also inflicts the target with a bleeding status effect. This attack should be used with caution however, as nearly every opponent that can be latched onto is capable of fighting back and hitting your Deinonychus while it is latched on. To let go of these dangerous opponents, simply press the jump button a second time. Whereas smaller opponents are concerned, the Deinonychus is capable of pinning them down in the very same manner as a raptor by pressing the secondary attack button (default

) when the target is in range.

The following creatures can be latched onto by the Deinonychus:

The following creatures can get pinned down by Deinonychus:

For information pertaining specifically to the real-world Deinonychus, see the relevant Wikipedia article.

Retrieved from "https://ark.wiki.gg/index.php?title=Deinonychus&oldid=500251"
Categories:
Hidden categories:
Cookies help us deliver our services. By using our services, you agree to our use of cookies.