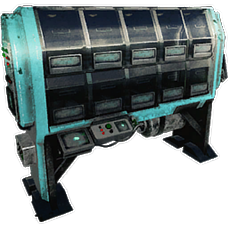 Deployable device for warming and monitoring up to ten eggs at once. Requires electricity to run.

The Egg Incubator is a structure introduced in Genesis: Part 2 and also available on Genesis: Part 1, Lost Island and Fjordur. It can incubate up to 10

Eggs by keeping them at their desired temperature based on the temperature adjusted from the wheel menu.

The Egg Incubator is designed to maintain the temperature of the eggs while incubating them inside. Adjusting the temperature adjust it for any egg residing inside the incubator, so planning is advised when hatching eggs from it.

While outside of the incubators inventory. Walking in front of it and looking at an egg from up close will show the colour regions and levels. But you can't interact with the eggs except by opening the inventory of the incubator.

The bar below the eggs represent the percentage to hatching, and its health pulse, color ranging from blue (very healthy) to orange (very unhealthy). Care must be taken if an attempt to hatch the egg was taken, as when unpowered or without at its optimal temperature, eggs can be destroyed in the process if left for too long.

Upon reaching 100%, a manual ejection from the Incubator's inventory is required to release the newborn, which will appear in front of the Incubator. Inferior eggs can be cracked(destroyed) via similar way that leave nothing behind if you do not want to make kibble from said eggs.

The Incubator cuts the hatch time down. The maximum boost is 20%, which can be reached if the device is set to maintain the egg's best temperature (which is the middle point of the temperature range needed to hatch the egg, rounded half up).

The Incubator will still hatch the egg as long as the exterior temperature is not too extreme, even unpowered. There will be no Hatching Speed Bonus nor Showing the stats of the offspring when unpowered, incubation process and egg health are shown as normal.

In patch 341.19, a new feature has been added for the Egg incubator. which can give the player a buff for checking the gestation. To view the baby's status or have an abortion

Retrieved from "https://ark.wiki.gg/index.php?title=Egg_Incubator&oldid=496383"
Categories:
Hidden categories:
Cookies help us deliver our services. By using our services, you agree to our use of cookies.