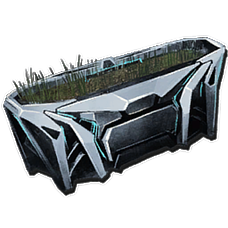 Put food for your nearby pets in this, and they'll automatically eat it when hungry! Can refridgerate items, so long as it's powered by a Tek Generator!

The Tek Trough in ARK: Survival Evolved is an advanced version of the Feeding Trough.

Feeding Trough, the Tek trough can hold almost any type of food for any tames. While it too allows strange items as stone or sulfur for Rock Elementals, it does not allow feces for Dung Beetles. Tames within its range eat from the trough before consuming food in their inventory. Any and all foods can be placed in the trough at once, so

Meat, and so on can all be mixed together to feed all types of tames.

Tames belonging to allied tribes can also feed from a trough. The Tek Trough must be powered by the

Tek Generator, otherwise food inside will spoil as if a survivor was carrying it.

It can also be used to craft

When powered, Food placed in the trough has its spoil time multiplied by 100 (same as the

Refrigerator). Furthermore, the total amount of food that can be stored inside is 100 stacks, while the refrigerator holds only 80.

The Tek Trough allows tames to feed within a cubic range of 11 foundations horizontally and 17 walls vertically from the point of placement. The tames do not have to move as long as they are within this cube. Tames that wander through the range area are also able to feed from it. You can confirm which tames are within range by observing the feeding trough icon above each tame's name. Tames display the icon regardless of whether the trough(s) they are in range of actually have suitable food for them.

The Engram is unlocked by defeating Beta

Crystal Wyvern Queen and must be unlocked in order to craft this item, but not to use it or equip it. Defeating the more difficult versions will also give the player the engram.

Retrieved from "https://ark.wiki.gg/index.php?title=Tek_Trough&oldid=492437"
Categories:
Hidden categories:
Cookies help us deliver our services. By using our services, you agree to our use of cookies.