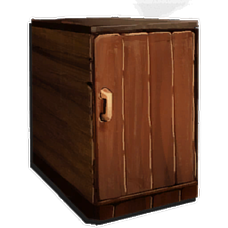 Burns simple fuel at low temperatures to dehydrate food and kill bacteria. Keeps perishables from spoiling for a small time.

The Preserving Bin is used to extend the spoil time on various foods and food ingredients. It requires

Sparkpowder to function. Food placed in the Preserving Bin has its spoil timer multiplied by 10. For example:

In addition to preserving food, the Preserving Bin can make

The formula to find how much

Sparkpowder would be needed to produce X jerky, including both the recipe requirement and to keep the appliance powered for the duration, is X × 4.2 for a single type, or ×3.6 for both types concurrently, rounded up. For example, 20 meat would need 84 sparkpowder; while 20 prime and 20 regular would require 144 sparkpowder. This does not take into account spoilage, so the exact yield will be off. Factoring stack and inventory limits, the most convenient ratio is 1:1 for single-type production (stacks of meat to stacks of sparkpowder) or 2:2:3 for multi-type (cooked meat to cooked prime meat to sparkpowder).

The Preserving Bin is powered by Sparkpowder. Placing a single Sparkpowder in the bin will keep it running for 30 minutes. For more information on spoilage and timings, see Spoilage.

The Preserving Bin is not currently paint-able, however this object may be re-mapped to include paint regions in a future update.

For more information on Paint Regions and how to use them, please view the 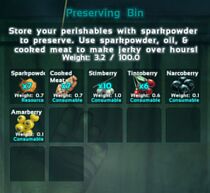 Screenshot of the Preserving Bin's interface.

Retrieved from "https://ark.wiki.gg/index.php?title=Preserving_Bin&oldid=492808"
Categories:
Hidden categories:
Cookies help us deliver our services. By using our services, you agree to our use of cookies.