This article is about the process of taming a creature. For the uses of a tamed creature, see Domestication.
How to Tame a Dinosaur

Creatures on the island can be tamed and used for various purposes. Uses for tamed animals include riding, item transportation, storage, hunting, harvesting, resource production, and defending property while you are offline. Items placed in a tamed creature's inventory usually take much longer to spoil than they would otherwise.

For certain creatures, such as the

Astrocetus, tranquilizers are ineffective. In order to inflict torpor on them, you will need to do damage to their head using a turret weapon. Because turrets themselves are immobile, one may have to mount said turret upon a platform saddle, usually the

Unassembled TEK Hover Skiff. The most efficient weapon is the

Cannon, as it's torpor-to-damage ratio will be the highest. Although you can also use the

Rock Elemental, and the

Catapult Turret on the

Titanosaur will refuse to eat anything, and will not regain hunger through any methods and will eventually starve to death. But if the private server or single player runs with AllowRaidDinoFeeding setting it can be force-fed.

All Corrupt tumors found at its body always take one damage per hit, which makes high damage ranged pointless. Rather, utilizing rapid-firing ranged like

Based on how much damage it takes, the titan type when tamed will change, each with higher stat. These are denoted as its prefix when it is first tamed.

Note that the first instance of food you feed to the creature is akin to knocking it unconscious with a violent tame - it binds the tame to the Survivor (or their tribe) and the creature's hunger will begin decreasing. At this point - the taming effectiveness and taming progress will not begin to diminish unless the creature starts taking damage (i.e. enters combat or starts dying of starvation). The initial delay between the first and second feedings compared to all subsequent feedings is also greater. Once fed a second time, progress will begin to reset if you take too long to feed. Moving too far away before a second feeding will also un-bind the tame - resetting everything (although its food may take a few moments to update). As with violent tames, you can bulk-feed a starved creature with an approximately 5-10 second delay between feedings. Due to the complete reset if you move too far away and the fact most long-duration non-violent tames don't have sufficient food to be substantially starved: this trick is only really helpful for taming skittish Ichthys or monkeys .

Some dinos must be tamed with unique methods.

With the exception of

Troodon, they too follow the same process in waiting to become hungry enough to eat again.

With introduction to Aberration, it is possible to tame certain aquatic creatures using

Fish Basket (which must be learned in Aberration map to utilize in other maps). While it requires time for the basket to set up, it can be utilized to capture and tame smaller creatures. Bear in mind it has a certain lifespan while being trapped; letting it "spoil" to zero will kill them. Creatures that have been tamed using the

Some creatures can be considered "temporarily tamed/commandable" (but not fully temporary tame like Liopleurodon or Titan), but either does not show up as part of the tribe (still rendered as wild), or are only interact-able as survivor.

Except for Reaper Kings, all of the raised creatures here can be bred (Wyverns can only breed with ones of similar type). However, getting an egg from two raised Magmasaur requires them to breed in a lava pool/puddle.

Three Creatures can only be "crafted" rather than through regular taming, through acquisition of its Blueprint, or crafted as level 1 (or 51 for the

Mek) at either a

City Terminal in Extinction or

In the case of both

Scout, these can both be found roaming around the Sanctuary. Destroying them will drop Blueprints related to their level, possibly ranging from Primitive to Ascendant based on their level, with random percentage of stats.

In the case of the

Mek, these can be crafted with a Level 51 Engram. They only come out as Level 51 and unlike the

Mek Blueprints can occasionally be obtained either from Hard or Legendary

There are two known creatures that can only be obtained or assembled with rewards only found from the world's boss/guardian.

Effect of the Taming Effectiveness

Taming Effectiveness (TE) determines the number of bonus levels that a creature will gain upon completion of the taming. Each level is another point in a random skill. These bonus levels are considered "wild levels" for the purposes of post-tame level-ups (e.g. +4% per level refers to 4% of the post-tame value) and breeding, and so maximizing TE is vital for procuring the best creatures.

Contrary to a popular belief, stat points gained like this are assigned completely randomly, and no stat is prioritised over other.

With a maximum wild level of 150 and a maximum TE of 99.9% for all creatures that have to eat at least once (creature such as the

In addition to bonus levels, most creatures have at least one stat that has a Taming Multiplier that is based on TE - e.g. the Rex has 17.6% multiplier on its

When breeding, newborns are considered to have 100% Te regardless of the TE of the parents. While this will not cause them to gain bonus levels, this will cause them to gain the maximum stat multipliers. This is why bred creatures will often have higher melee or food stats than either of their parents.

This method is no longer effective.

There are ways to speed up taming using Battle Tartare. However its not an easy technique, and you need to be aware of several things:

Raw Meat for Carnivores). For the

Tranq Arrow number it is assumed they hit the body, if there are no other annotations, using a

Crossbow. Targeting the head is more effective for most creatures.

For additional info on the food and time needed for each creature, visit their individual pages, as the needed resources vary largely depend on the level and used food.

* These tames ride on the player's shoulder.

* These tames ride on the player's shoulder.

Dung Beetle is not a Carnivore but prefers

Spoiled Meat after it is tamed.

Tranquilizer Arrows shot by a 100%

Not all creatures can be tamed. Most creatures that are tamable through certain ways have the prefix "Wild" next to their name. Untamable wild creatures do not have such prefix. 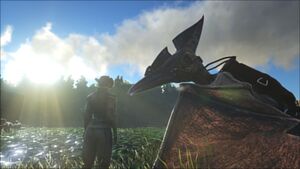 The following creatures are currently not tamable except by use of the forcetame command.

Retrieved from "https://ark.wiki.gg/wiki/Taming?oldid=489344"
Categories:
Hidden categories:
Cookies help us deliver our services. By using our services, you agree to our use of cookies.