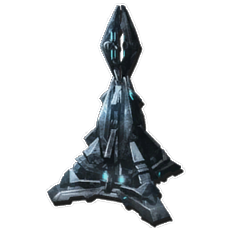 The Tek Forcefield can provide an energy shield that protects an area from damage. It's part of the Tek Tier-building set.

The Tek Forcefield can be placed without the need for a foundation. It functions underwater, and it can also be picked up.

Element to run. Upon activation, it will have an initial start up time of 5 minutes before it is activated.

It also acts as a safety bubble within radiation zones (Like the Molten Element Region maps at Aberration and The Unknown at Valguero), causing no radiation sickness to those not immune to it.

The Forcefield can not be damaged by normal rifles, melee weapons and most creatures (wild or tamed).

It can only be damaged by:

If significantly damaged, the dome will start to blink. When destroyed, not only does the structure itself vanish, but any Element left inside will also be destroyed.

Hitting the Tek Forcefield with a dyed Paintbrush will colorize the energy barrier while activated.

The Tek Forcefield is not currently paint-able, however this object may be re-mapped to include paint regions in a future update.

For more information on Paint Regions and how to use them, please view the