This article is about Dinopithecus, not to be confused with 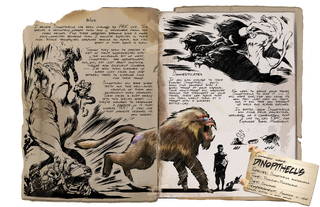 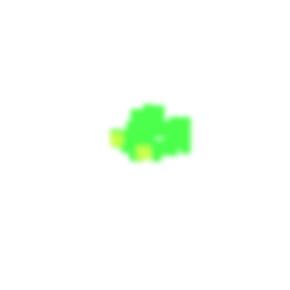 The Dinopithecus (DIE-no-pih-the-cus; also known as the Monkey or the Baboon) is a creature in ARK: Survival Evolved's Lost Island DLC.

I believe Dinopithecus has been changed by ARK life. This species is definitely larger than any I remember from the fossil record. And these oversized baboons show a more pack-oriented behavior than I would've expected in their kind. Whole troops will organize around an alpha, and fall apart if that alpha is slain. Though they seem to prefer a diet of fruit supplemented with the occasional bit of meat, Dinopitheci are opportunistic and will eat just about anything. They’re also excellent climbers -- I’ve seen them scramble up sheer cliff faces and leap between trees to scavenge food for their troop. Dinopitheci will bare sharp teeth and toss well-aimed handfuls of their own excrement when provoked. Their feces is what really sets this species apart -- they’ve managed to weaponize a parasite in it that disables TEK! I feel like that parasite deserves its own dossier.

If you can manage to tame enough Dinopitheci , you’ll soon find yourself with a small troop at your disposal. Your mini-troop will organize around the strongest of your tames, their new alpha that can then direct them at a target with a shrieked battle-cry. No need to saddle your tamed Dinopithecus to ride it -- it will make one for you using its own tail. Just hold on tight, and it will take you straight up walls and across ziplines. In battle, your Dinopithecus will fling fecal projectiles, grenades, or a combination that I like to call EBM, for Explosive Bowel Movement.

This section displays the Dinopithecus's natural colors and regions. For demonstration, the regions below are colored red over an albino Dinopithecus. The colored squares shown underneath each region's description are the colors that the Dinopithecus will randomly spawn with to provide an overall range of its natural color scheme. Hover your cursor over a color to display its name and ID.

The Dinopithecus can be cloned with the

The Dinopithecus can be tamed non-violently rather than through the usual methods. However, only Pack Leaders can be tamed.

To be able to passively tame it, first the Alpha within the pack has to be identified, which can only be seen with the glowing aura around its body much like other creatures with said buff. Upon discovery, start killing off every other Dinopithecus nearby as they will not allow you to start passively tame the creature (this excludes any wild baby, juvenile or adolescent nearby). After slaughtering all the nearby Dinopithecus, the alpha will attempt to flee. Reduce its health below 85% (go as low as possible before attempting to tame it), and start passively feeding it.

Be wary if any other Dinopithecus wanders nearby during the taming, as they can hinder the taming progress just by being around the alpha.

For information pertaining specifically to the real-world Dinopithecus, see the relevant Wikipedia article.

Retrieved from "https://ark.wiki.gg/index.php?title=Dinopithecus&oldid=501422"
Categories:
Hidden categories:
Cookies help us deliver our services. By using our services, you agree to our use of cookies.