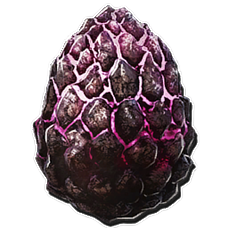 Tremendously nourishing by itself, this egg provides extraordinary nutritional value in many cooking recipes.

Rock Drake Eggs are items introduced in Aberration. It is used to hatch

Rock Drake, can be used to make

Rock Drakes. They can be eaten or used to make

Rock Drakes mate, the resulting egg can be hatched into a baby

Grabbing an egg in the presence of wild

Rock Drakes will cause them to become hostile and attack the survivor.

Rock Drake needs between 18h and 2d before having the capacity to lay eggs again. The incubation time can be reduced by up to 20% if the egg is placed in an

Egg Incubator at the ideal temperature.

Rock Drake Eggs are only found in The Grave of the Lost, below Element Falls which is behind a twin waterfall. This area has distinct yellow lighting. Along the walls there are many indentations, some of which will contain a nest with a Rock Drake Egg. Upon stealing the egg, any nearby (within the Element Falls) wild Rock Drake will begin to attack the player. The fact there are no usable flying creatures in aberration combined with the wild Rock Drakes' small turn radius and gliding ability during pursuit makes acquiring these eggs quite dangerous.

Because the location is situated within an irradiated area, it is advised to wear a full Hazard Suit. The location is also a possible spot for Nameless packs to emerge as well, so bringing a source of charge light is advised such as Lantern Pets.

If one already has a tamed Rock Drake, they are the easiest way of getting an egg, as it can glide away from the nest, climb around the falls, and is immune to radiation poisoning. Be sure to have it high on health and/or stamina, as the wild Rock Drake will not take kindly to tamed Rock Drakes once the egg has been taken, even when camouflaged.

Some creatures are naturally immune to the radiation in the area, such as the

Megalosaurus. If they are high enough level, they can be used individually or in groups (preferably with mate-boost and imprint for better success) to kill aggressive Rock Drakes after grabbing an egg.

Alternatively, a fast mount can be fed

Mushroom Brew for radiation protection, such as

Ravager, to get away from the pursuing drakes. Upon grabbing the egg, with Glider attachment equipped, hightail out of the nest to where the dino is parked and run away from Element Falls.

Another way would be to bring a health-boosted dino (preferably one that can be mounted) and park it somewhere above. Then bring a

Ravager, along with a few

Climbing Pick and a

Zip-Line Anchor(zip line anchors and grappling hooks don't work in the majority of the surrounding area. Structures cannot be placed either. If you do bring Megalosaurus' or Spinos take note that they will be stuck down there if you bring them down the ravine).Position the artificial zip line around the nest to ensure a quick getaway, and lure all the aggravated Rock Drake towards the mentioned dino (ensure to get away as fast as possible to prevent death) to deal with them. Also, using this method requires constantly fighting any Rock Drake nearby when escaping. If you bring Megalosaurus to obtain Rock Drake eggs, be aware of Purlovias, which can ambush you and stun you for 10 seconds.

Karkinos are a great choice, being naturally immune to the radiation in the area. A decent level one is very durable and its twin pincer attack is able to strike many Rock Drakes at the same time. Be mindful, however, that the Karkinos cannot attack while in the air, and due to the fact that Drake hit boxes have priority over others you may find yourself lifted up by a large crowd of angry lizards and unable to fight back. Always try to kill as many as you can before stealing any egg. If patience isn't your deal, be sure to bring at least one tribemate with powerful, radiation-immune creatures (such as mate-boosted or/and imprinted

Spino), also consider having a

Assault Rifle ready to defend you and your tame from the back of your crab.

All caution taken, this method can prove to be extremely rewarding; Karkinos are able to reach any and all nests, delivering your survivor right atop of the desired eggs, which therefore makes you virtually invulnerable to any kind of threat that could otherwise strike you on the way back to the relative safety of a saddle.

Possibly the best creature to collect a survivor's first Rock Drake Egg, the

Reaper are almost never used mainly for their extremely hard and time-consuming tame; While Rock Drakes themselves are recommended to navigate around the

Reaper Queen infested areas, dedicated breeders might find that even a mate-boosted duo of either Spinosaur or Megalosaurus are able to both dispatch unwanted Queens and weaken the desired one with ease. Also, one might consider the used of a structure-covered

Paraceratherium to sneak itself down their chamber and later build a trap in order to snare one (refer to Reaper for further information on taming).

Reapers - even middle-leveled ones - are able to either outrun or totally overpower wild Rock Drakes, also, because of their jumping ability (and much akin to the Karkinos) they can reach any nest of your choice (be ready to spend some time "parking" your Reaper). If you choose to run, try to use your jumping ability as much as possible (when just running, your basic speed is roughly the same as, if not slightly slower than wild Drakes). If fighting is the option you chosen, just remember to take the caution to not put yourself between the furious lizards and the corrosive Element ponds, or you might be forced into a very toxic bath.

As a final note, go ahead and get multiple eggs if you can but don't be greedy - most Reaper Kings carry less than 700 points of weight and you don't want to mess around in Elemental areas with more than 50% of your weight capacity in use.

Entering the area with hopes of getting an egg without the aid of a mount is a largely foolish attempt, as Wild Rock Drakes will swarm around the thief that is in possession of it. It is however doable, if you plan this right, and its even easier if you are in possession of a full

Tek Armor, since you are able to jet upwards with the chestpiece (Assuming you carry enough element to last throughout the run). However, if that is not possible, read the pointers.

Glide from the top of the world, and look down until you are nearing the nests. Once you are close to the nest, watch the surrounding for any camouflaged Rock Drake.

Some pointers to take note:

Rock Drake nests are only found in Drake Nest in Fjordur, within the Asgard Realm. Much like The Grave of the Lost, the area is irradiated, which requires the use of

Hazard Suit Armor to avoid Radiation Sickness. They are much easier to reach, but quantity of nest spawns are very limited.

Rock Drake Eggs require a very low temperature in order to hatch. A minimum of 20

Air Conditioner inside an enclosed room and depending on the location will be needed to reach the required temperature. It takes around 3 days and 20 hours to grow to an adult and they will take

Nameless Venom for imprinting, petting can be rare prompt however.

Incubation temperature in an Egg Incubator is -85 °C.

Taming/Breeding multiple Dimetrodon may be a better option as you can pile many of them into a small area and throw the eggs in the middle to incubate them with no electricity need.

The mountains of Ragnarok can be used as a hatching ground, however no Drakes spawn on this map, leaving obelisks as the only option to get there, followed by a very dangerous trek to reach the area.

Alternatively, with Genesis: Part 2, one can place it inside

Egg Incubator without worry for temperature being too hot.

Retrieved from "https://ark.wiki.gg/index.php?title=Rock_Drake_Egg&oldid=498145"
Categories:
Hidden categories:
Cookies help us deliver our services. By using our services, you agree to our use of cookies.