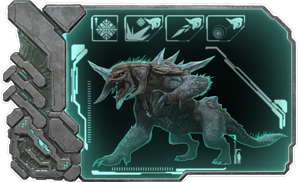 Unlike most Creatures, the Ice Titan picks certain targets to kill and mainly focus on those targets. It pounds and swipes at its targets and jumps.

The Ice Titan is a massive quadrupedal monster with small teeth, huge claws and horns similar to that of a bighorn sheep. It also has a single horn in the middle of the other horns. The Ice Titan also has bright white fur. It stands at 253 feet (77.3 meters), has a length of 532 feet (162.3 meters), and weighs 59,466 US tons (53,947 metric tonnes).

Mek Saddles
The item entry "Mek Saddles" contains exactly 1 of the following items.
only as blueprint
with quality 180% - 300%

The tier set "Ammo" contains at least 10 and at most 20 of the following item entries.

Element - Chance 40%
The item entry "Element" contains at least 1 and at most 3 of the following items.

This section describes how to fight against the Ice Titan.

When you teleport back to the Snow Dome, the Ice Titan begins to assimilate out of thin air. The battle begins when the Titan lets out a loud roar and jumps to the center of the Snow Dome.

King Titan) with its base HP of 350000 and its attack dealing between 1500 and 2500 damage. Its stomps are easily dodgeable but avoid its breath attack, it will automatically freeze the survivor solid and a frozen survivor is as good as dead if the ice titan is targeting you. The jumping attack is the most difficult to avoid due to the area it can stomp on, one tactic to defend from it is to be on a mount with a high movement speed and to charge directly at the Ice Titan as it will overshoot and land behind.

After a period of time, the Ice Titan will start to periodically emit an icy mist. This mist will begin to freeze the survivor, eventually immobilizing them. Note that if you get frozen you can constantly use your button to attack (example would be left click on PC) and it will thaw you out faster. Creatures that are frozen will be incapacitated for much longer, typically 30–60 seconds.

Other Creatures can attack you during the fight such as

If you're planning to kill the Ice Titan there are a few important things to take note of. Due to the sporadic targeting nature of the Ice Titan it can be difficult to contain it to the arena since it will jump around and target any living creature in the area. Therefore if you plan to kill the Ice Titan you will need to entice it with some sturdy tames.

It is easily distracted by any nearby Creature. This can allow you some breathing room and to deliver extra damage until it changes to targeting

The Ice titan has an attack blindspot outside its right hand and on its flank. This in turn forces the Titan to constantly rotate to center itself on you. It is risky when the Ice Titan's hand can trip your Mek, making you vulnerable to its ground pound.

For players that use meks, the Ice Titan attack's are extremely slow, giving players enough time to dodge its attacks. A player in a mek can use a variety of combo attack while also dodging its attacks. For example, when you use the mek's boosters to fly towards the titan, move in any direction at the last moment, making the Ice Titan misses its attack. On top of missing its attack, it needs to adjust itself to be centered on the player, giving them enough time to land several attacks and safely retreat out of its attack zone while using its pistol to deal a little more damage.

The Ice Titan is tamed by attacking the corruption nodes on it's right ankle, right shoulder and chest in a designated sequence. After all corruption has been destroyed, the Ice Titan can be tamed by interacting with it and will come pre-equipped with a special

Platform Saddle. The saddle placement varies per Titan and the Ice Titan can be controlled via a special cockpit area on the saddle.

A Common tactic is to use a

M.S.C.M. Module on your MEK to destroy the nodes. Be careful as the ammo of the module is extremely expensive. In the fight itself, you should keep distance with your MEK and only attack the titan when it is distracted by wild creatures. Then you can get closer to it and quickly switching to stationary mode and shoot a rocket at the node. For the last node, you need to get it to focus on you. While it is walking towards you quickly shoot a rocket at the node.

When using Meks to tame the Ice Titan, be sure to use both boosters and the pistol at the same time, enabling the Mek to be damaging the node while also dodging its attacks. For hitting its right ankle, you need to be in range of its rear foot stomp, and dodging it at the last second. This gives a decent time gap for you to damage the node while it tries to adjust itself on you. To hit the node on its right shoulder, you need to provoke it to use its side ground pound attack, giving time to damage the node. For the chest node, you simply need to aim at the chest and only move back when the Ice Titan is doing its center ground pound attack animation. Repeat these processes until the nodes have been destroyed.

It is important to note that the more damage done to the Ice Titan, the weaker the Ice Titan will be after it has been tamed.

The following items are needed to open the Ice Titan Portal:

Use these commands to give yourself all the items needed for tribute:

The Ice Titan can be tamed to help defeat the

Note: For changelog on all titans in general, go to