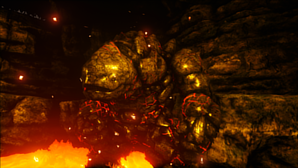 Rock Elemental from Scorched Earth. Unlike the

Rock Elemental however, it is roughly twice as large with black metallic rocks all over its body and lava surging through cracks in its rock armour.

This table contains the stats a creature has at Level 1, as well as the amount that each stat increases by when it is leveled up both in the wild and when domesticated.

The Lava Elemental is encountered inside a volcanic cavern covered in crystals. The cave's center is a lava-filled lake with mayan ruins and tilted pillars (You can jump on). Opposite of the entrance is a location where players may hide and shoot down unto the Lava Elemental, whom will be fairly unable to attack you back.

Avoid getting hit by the molten rocks as you will be killed if you get hit a couple of times. Grappling hooks can be used to get on top of ledges in the cave, such as the ones opposite of the entrance (Crystal nodes lining it), in order to get a better position to shoot the Lava Elemental. You can also use a Velonasaur from a point above him were he can`t hit you with his main attack and his rocks.

Rocket Launcher. Be sure to bring a lot of rockets and at least 3 launchers as the Lava Elemental has a lot of health.

Melee and bullet damage is massively reduced, so melee weapons are not recommended as they do little to no damage. You could also bring an imprinted

Velonasaur with you in a

Cryopod, and attack the Lava Elemental with it.

If you have, a

Tek Rifle (it does full damage) as well as a

Tek Shield (it can reflect his projectiles and set him on fire, which does up to 15000 damage to him) are the best weapons to fight the Lava Golem with.

The molten rocks it hurls will do large sums of damage with a fire proc, also avoid falling into the lava in the middle and cracks in arena.

Shoot its arm or hand for maximum damage. Make sure to watch the animation to avoid missing. There is a spot high up in the cavern where it can't hit you as long as you aren't too close to the edge. Additionally, contrast to it's large size, it will almost never hit you if you are between it's legs.