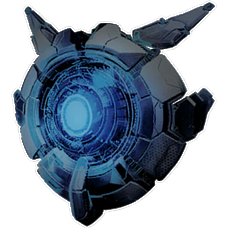 HLN-A is an artificial being created by Helena, with some of her personality and voice formed inside the AI. She was created as a guide for the survivor, with several useful functions to assist.

HLN-A was created by The One Who Waits ( ascended Helena ) as a means to aiding survivors in the Genesis Simulation ( Part 1 ) and somehow on the Genesis ship ( Part 2 ).

She was created when The One Who Waits entered the Genesis ship but left almost immediately after HLN-A was created.

Her creation coincides with Rockwell’s appearance on the colony ship -

Like Helena, HLN-A is a cheerful, optimistic and friendly AI that will do anything to help the survivor out but without the experiences of the former. With Helena doing many things on the ARKs and as a Homo Deus, HLN-A feels she has high expectations to meet and wants to do her best to meet them with her own achievements.

When playing Genesis and doing things in the map, HLN-A would unpredictably respond to what the player is doing. There a multitude of responses and some instances include being idle for too long, and she would think and respond that the player is in another simulation, and being close to a baby creature where she would mention the player is having a selfie with it.

HLN-A is a circular robot that has her eye change depending on the emotion it wants to convey to the survivor.  The emoji projection in the middle of it changes to convey its emotions. Even the hologram color changes depending on her emotion.  Also, her appendages can move to distinguish direction and emotions.

In the Genesis: Part 1 Tidbit Glitches, there are many times HLN-A ends being glitched herself. Here are some instances:

HLN-A can scan creatures and display their stats. To do so, you have to press "H" on PC or the "Back Button" on console while looking at the creature you want to scan.

HLN-A can teleport survivors nearby that are within the tribe (and any tamed dino) to a selected biome and direction. The color of the teleporting dome represents where the survivor is being teleported to.

Any dino belonging to the tribe will be warped if its within close proximity. Often, the warping for the dino may fail, causing them to be left behind if the surrounding area for teleporting isn't suffice enough, or due to network latency.

Often over time, she can be interacted with to produce 300 Hexagons and prompt a short message.

HLN-A can be interacted to teleport to System Root with enough mission cleared per difficulty, a location to fight the Final Genesis Boss. Anyone within the vicinity and is in the same tribe or alliance as the survivor who started it will be teleported as well, regardless whether or not they have cleared enough mission. Note that only creatures belonging to the survivor's tribe who started it will be teleported, but NOT those belonging to an alliance.