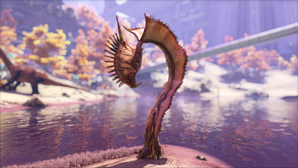 The Carniflora (CAR-nee-floor-uh) is a carnivorous plant in Genesis: Part 2. Found most likely in and outside Rockwell's Garden. It cannot be grown by the player.

The Carniflora are weak to flames, anything that burns will destroy them. Be incredibly cautious, Carniflora are aggressive and will attack by biting and picking up the survivor, inflicting large amounts of torpor in seconds.

Flamethrowers and flame arrows work best as they are out of the Carniflora’s reach. However, torches also work if you can manage to not be snatched. Interestingly, you can escape the carniflora’s mouth similar to a Bloodstalker.