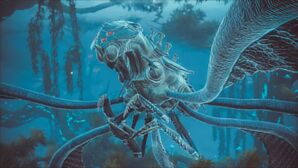 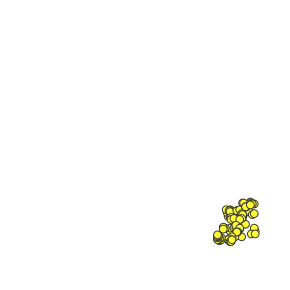 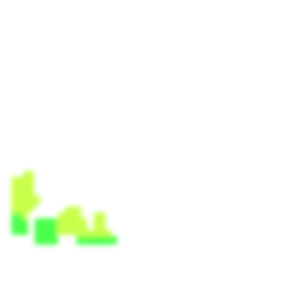 The Bloodstalker is a Creature in ARK: Survival Evolved's Expansion Pack Genesis: Part 1, and Part 2.

The Bloodstalker is an aggressive creature in ARK: Survival Evolved that shoots webbing to latch onto prey and reel them towards it while on the ceiling or walls of caves or in trees. The Bloodstalker kills its prey by draining its blood and impaling it with retractable spikes in its feet. The Bloodstalker's web attack has a very long range and can grab most creatures its size or smaller. They also are in a close vicinity with one another making avoiding one very difficult if you happen to be in their area.

Very rarely, if they are found on the ground, they will attack like any other aggressive creature, but may try to shoot webbing similar to when they are on a ceiling.

Much like Gerridae family of insects, the Bloodstalker is able to skate across the water but by pressing X,

The Bloodstalker resembles a giant spider (or more specifically, a giant Pholcidae), though it has many bizarre and alien features that clearly make it distinct.

It has 12 limbs in total. The six mantis-like arms are jointed and have sharp spikes on them for grasping and holding prey. The six squid-like legs are very long and tentacle like, with webbing to allow better maneuverability in the air. Each leg has a foot with distinct parts. The back of each foot has two spines. The main tubular part of the foot has four small claws and a large retractable spike. While the body is not segmented like an arthropod, it does have an abdomen, main body, and head. All limbs attach to the underside of the body. The entire back is plated with chitinous armor and several strange pillar-like protrusions. The abdomen has what appear to be spiracles for breathing and has jagged spike at the end. At each shoulder of the creature lies a nozzle that shoots out webbing. The face is armored and bears four compound eyes and a huge, stabbing proboscis for sucking blood.

This section displays the Bloodstalker's natural colors and regions. For demonstration, the regions below are colored red over an albino Bloodstalker. The colored squares shown underneath each region's description are the colors that the Bloodstalker will randomly spawn with to provide an overall range of its natural color scheme. Hover your cursor over a color to display its name and ID.

The Bloodstalker is usually encountered when it latches on to you with its webbing from far away clinging to a tree. They are able to web you off your mount once you get in range and, once webbed, it will draw you in until it can hold you and start sucking your blood. When hit with a string of webbing, your vision will become blurry and the screen will sway.

You can kill them with ranged weapons even when being reeled in if you can manage to fight against the screen sway, but as soon as you are in the Bloodstalker's clutches, you become unable to use any tool. The only way to be released is to punch it. Keep in mind that fall damage becomes a great concern once released.

If you do escape from the web, the Bloodstalker may still try to chase you and kill you (even more so if it had latched you while its on the ground and not climbing), so melee weapons, dinos, or ranged attacks will come in handy for dealing with the creature.

Due to the nature of how the Bloodstalker spawns, unless you are often looking up from the tree or high grounds, you may get randomly webbed and pulled upwards.

If the Bloodstalker is spotted before it spots you, attempt to kill it from afar with range weaponry in order to rule out the chances of being killed.

Often times, preparation is impossible and being hit by a webbing is imminent. To prevent being drawn in completely, shoot at the Bloodstalker with a ranged weapon to kill it or order a dino to attack it if possible.

Once pulled in, punching allows you to possibly escape from the sticky fate. Escape chance starts at 0% but once you start fighting back, the chance of being freed increases by 5% until you are released.

Most of the time the Bloodstalker will be very high up and so even being released can mean a death sentence, making a

Ranged weapons such as a

Fabricated Sniper Rifle work best when afar. If webbed and your intentions were to kill it, ranged weapons can still be viable if the screen swaying can be managed. If not reeled in, a strong weapon such as

Pike or a strong tame can also suffice if on the ground.

An unprepared survivor can easily be killed by a Bloodstalker. Bloodstalkers are found high up waiting on tree branches, which means you can die from fall damage when escaping it's grasp. It's recommended to bring a parachute to safely return to the ground. Be aware however as other Bloodstalkers can catch and reel you in as you parachute down. Bloodstalkers can also latch onto you while riding most mounts(Flying mounts are the most likely case if on unofficial), tamed Bloodstalkers included, so remember to keep them on follow if your exploring where they are located. Keep in mind also that for their size, the Bloodstalker has quite decent

Hitting the bloodstalker once its latched onto you quite often will break free from the clutches. Moreover, while it is latched onto something, it will not be able to do anything else.

Stegosaurus will prevent bloodstalker from dismounting you.

Bloodstalker is tamed non-violently, rather than through the usual methods.

Blood Pack in the inventory (doesn't matter where, whether in the toolbar or not), locate one of the creature found at a giant tree and let it latch onto you. It will start draining the blood pack once latched very quickly, and will continue to do so until either there are no blood packs left, or it is tamed. If the bloodstalker is tamed during the process, it will latch the survivor on it as if the survivor is riding on it, ensuring the survivor does not fall to his/her death thereafter. Testing confirms 10 blood packs are needed for every level. 50 blood packs for a level 5.

Be wary however, as the Blood Pack expires with 30 minutes without any form of preservation like

Preserving Salt, searching to tame it must be done if blood packs are to be made immediately, and even more so as you need at most 1.5k Blood Packs in your inventory for a 150. Bring a few

Parachute to escape from the current Bloodstalker after freeing from it. While being held by a bloodstalker, you will not be able to create more blood packs or consume any consumables (ie. Medical Brews/Food/Soups).

Bug Repellant while taming can be useful, as it wards off the bog’s prominent

Insect Swarms from attacking and potentially interrupting the tame.

By default, the efficiency starts at a low percentage (around 50%). To increase its taming efficiency, it requires bloods from killing tamed creatures that it grabbed on (Example are

Moschops), which increase its efficiency by a small percentage per kill. A tame with more health gives a bigger increase. Efficiency does not drop once it is raised, allowing taming to be safely made without risking any lowering of efficiency.

Bloodstalker Egg can be picked up. Be sure that your hatchery has enough air conditioners or standing torches.

Blood Pack. Raw Meat fills 10 Food and Blood Pack fills 200 food. Baby Bloodstalkers lose 48 food per minute / 2880 Food per hour, so you will need tons of raw meat to maintain babies health. On the other hand, Blood packs might be the best food item for Bloodstalkers if you don't want to spend your time on babies to feed them with raw meat. Also, Blood packs are much lighter than raw meat. Don't forget that blood packs only last 2 hours in a dinos' inventory without

Tamed Bloodstalkers latch onto survivors and provide the survivor with height and enhanced vision (Known as "Spider Vision", similar to

Tek Helmet pulse mode). Due to its nature, this Creature can latch onto branches and attachable walls with its silk and swing from one end to another, latching onto another while swinging. Holding LEFT CTRL button will cause the blood stalker to fall slowly. It jumps upwards twice, with additional jumps every successful momentum.

Mastering web slinging is tricky, but very useful once learned, and will be the main mode of travel in most situations. Left Mouse button slings one web either at the wall or at a target, whereas Right Mouse button sling both webs. Where the bloodstalker is aiming its web at can be determined by where the circle target is currently aiming. Holding the corresponding left/right mouse button pulls the bloodstalker towards the attached area/creature, building momentum, and when pressing jump right, will allow it to jump farther up than intended. The web will remain on the bloodstalker until either LEFT CTRL button or jump button is used, allowing the survivor to latch onto certain creature in suspension.

Some creatures and players can be webbed and pulled in for a feast. Bloodstalker will feast on such creature's blood, replenishing both its

Food. However, be careful as other creatures can still attack you. Press X to cancel the feast.

Moreover, if the survivor pulls out a Weapon, it will adjust itself upwards to allow for a clearer shot. It enters into water walking mode, and can switch to swimming (via submerging) by using the "X" button (L1 and L3 on console). If however, the bloodstalker's

Health falls below 40%, it will slowly drain the survivor's health until it goes above it. You can also keep Blood Packs in your inventory to feed your spider instead of it being fed by you.

Creatures that Can be Grabbed

- Shoot one web. If aiming at a small creature, the creature will be reeled in
Rmb,

- Shoot two webs, hold down to be reeled in
X,