Various Environmental factors in ARK: Survival Evolved can affect the way the game is played. These events can be beneficial or detrimental to the survivor.

(See bottom of this section for Status Effects on Temperature)

Temperature is one of the core survival mechanics players have to contend with in ARK: Survival Evolved. It is arguably one of the more challenging mechanics, due to the vast number of environmental factors that make it difficult to accurately track. In addition, the Status Effects that affect the player in extremes Temperatures are subtle enough that the dangers of them are often unapparent until they've already put the player in significant danger.

In essence, the goal to this mechanic is for the player to maintain an optimal Temperature, or otherwise prepare for the side effects when unable. Maintaining a working knowledge of the many factors that affect Temperature is necessary to be successful.

There are many different environmental changes and player actions that can affect the Temperature of a player(s).

This is the global stat that affects any and all players on an ARK Server. It can be viewed at any time on a player's Inventory Screen in the 'Character Stats' on the right side, under °(C), or pressing and holding H. This stat will constantly fluctuate during game play, and will sometimes raise/lower to extremes on its own, forcing players to constantly adapt and change strategies to avoid death.

Anything that uses some sort of flame such as a

Torch will give off Heat nearby, raising the Temperature of any players near it. This includes:

* The range is given in the in-game units. 800 units is about 2 and a half foundations. The closer you are to a fire source, the more insulation you get (given insulation numbers can be met when standing closely to the fire source).

The effects from multiple heat sources can stack. Consider the (dis)advantages when placing Heat-generating structures close together.

Standing Torch give the same hypo and hyperthermal insulation, so it is better to use

It will also negate the effects of inclement weather. (+112 hypo and +56 hyperthermic insulation)

Any Clothing or Armor that a player equips has the potential to improve (or worsen!) their Temperature under the right conditions. This is represented by the "Hypothermal/Hyperthermal Insulation" stats listed on a Clothing's item description.

Each type of Clothing/Armor has different impacts on a player's Insulation levels. The Armor page details each set's insulation against heat and cold.

Severe weather can have an adverse effect on members of your tribe.

In addition, please note that in both extremes, the player will experience direct health loss in addition to other effects. Combined with the increased rate of

In the sections above you can find tips to mitigate the temperatures effects. Following are a few more tips to lower or raise your own temperature:

Currently, extreme temperatures/weather affects the players' water and food meters, as well as visibility and other factors. On rare occasions, different weather types can happen simultaneously so long as they do not directly contradict each other (combination fog and rain are a common example of this).

Waterskins from anywhere outside. Rain also slightly decreases the temperature of the island, but only by 3-5 °C / 5-10 °F. Note: you cannot avoid rain by flying above the clouds.

Thunderstorms act like regular rain storms but with the the added effect of lightning and thunder. Lightning can light up the night while thunder can disguise the sound of footsteps.

Snow, only present in snowy biomes, drops the temperature even further, reducing visibility and, like real snow, slightly dampens sound. It can also be accompanied by high, loud winds and blizzard effects. It is the snow biome equivalent to rain, and will happen simultaneously with rain storms in other sections of the map. You can fill your water containers with falling snow, similar to rain, and strangely you do not have to melt it first. Note: you cannot avoid snow by flying above the clouds.

Fog seems to do nothing aside from reducing player vision immensely, though this is plenty dangerous on its own in certain circumstances. Fog also makes clouds lower and thicker, so flying at higher altitudes is more difficult due to obstructed vision.

Minor Heatwave events drastically increase the temperature of the whole map by between 16-28 °C / 30-50 °F, resulting in faster dehydration, and health damage at or above roughly 50 °C, but can also make areas that are otherwise too cold to easily survive in hospitable for a short time. During the event, cloud cover diminishes and the sky can turn an orange or red color.

Cold snap events are the exact opposite, drastically decreasing the temperature of the whole map by 16-28 °C / 30-50 °F, causing higher food consumption, and health damage at sub-freezing temperatures (careful in those mountains). Again as the opposite heat events, these can make areas ordinarily too hot to venture into a more friendly environment for a brief amount of time. During these events the sky becomes overcast and drops a haze over distant areas, as well as an odd pale yellow/orange color to the sky.

Extreme heatwaves are found on Scorched Earth and in Emberfalls on Crystal Isles, and result in extremely high temperatures, generally in excess of 55 °C / 130 °F. This is almost guaranteed to cause health damage and the Heat Stroke effect if the player is caught out in the open. Effects include the total disappearance of cloud cover, a strange whining noise, red skies and sparks flying around the ground. This event also causes the Phoenix to spawn for the duration of the event, the only time Ark's most elusive creature can be found.

Electrical storms, only found on Scorched Earth, deactivate electronics (such as cryopods) and prevent some advanced weapons from firing. Tek generators are not affected. There is no rain in this type of storm, only very dark clouds, high winds and some dust and debris (and of course, lightning). Unlike nearly every other weather event, electrical storms do not directly affect the entire map, but instead hover over a random area (which is still fairly large) and repeatedly bombard it with lightning.

Sandstorms, only present on Scorched Earth, severely limit visibility, while also draining stamina and adding sand to the player's inventory.

Windstorms, which only are active on Ragnarok, limit visibility much like sandstorms, but not as severely. Windstorms also increase the wind speed, which can assist players who use Wind Turbines, as the storms can raise the wind speed past 100%.

Unique to the Valguero map, these beautiful atmospheric effects do very little other than add to the aesthetics, although the Aurora does brighten the night a small amount.

Unique to Extinction, eclipses temporarily darken the entire map, something very rare for extinction due to most of the map being permanently in sunlight.

The following could be classified as weather events and operate under similar mechanics, but can also deal direct damage to players and buildings rather than through status effects or visibility issues.

If playing on Aberration DLC, normal weather events do not occur. (The only possible exception to this is the extreme daytime firestorms on the surface which could classify as a very regular weather event) Instead, there are periodic Earthquakes, which cause a random assortment of resources (based on the region) to drop from above. Earthquakes also prevent the usage of

Climbing Pick, and causing those already using them to drop off the wall, potentially to their death. -Spoiler-In lore, these earthquakes are probably not a part of the original Ark's (station) design but are more likely the continuation of the incident which destroyed the map's surface and ripped open the Aberration cavern.

Found only in the volcanic biome of Genesis: Pt 1 and in a very specific area of Ragnarok. Note that while many maps have volcanic areas with continuously erupting volcanoes and lava present, this list is for volcanoes that have eruptive cycles.

Genesis: The main volcano in the lava biome erupts periodically. To anyone caught inside while trying to steal an egg, it means instant death without a magmasaur, and can cause damage to surrounding areas via lava and explosions. Eruptions are often preceded by an earthquake, but not always.

Ragnarok: On rare occasion, Ragnarok’s northern volcano will erupt, sending lava down its normally bare slopes and hurling giant, deadly boulders flying, some of which can burst apart in mid-air; creating a spectacular display that destroys everything in its path; including plants, animals and unfortunately placed bases. There also seems to be two separate types of eruptions, one more destructive than the other. To those brave enough however, there is a relatively safe spot near the summit to view the event.

Unique to Extintion and Genesis Pt 1’s lunar biome, meteors are giant rocks that slam into the map at high speed, killing even the strongest tames instantly. (The meteors spawned during the King Titan boss fight do not instantly kill tames or players) On Extinction, the sky will turn red as a meteor shower starts, raining flaming boulders across the entire map. Only the Sanctuary, Snow Dome, Desert Dome, and Sunken forest are safe from them. On Genesis part 1, the meteors will spawn in the lunar biome and come from any direction. They have gigantic blast radii and are visible from across the biome. Avoid meteors at all costs, no matter what you’re doing.

There are three seasons in Aberration that combined make up one "year," or cycle through all of the seasons, that lasts 10 days. These "years" start on days that are a multiple of 10 (day 0, 10, 20, etc.).

Hold H in game and look at the top left of your screen to see the current day and season.

How Time is Affected 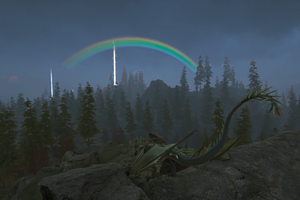 Retrieved from "https://ark.wiki.gg/wiki/Environmental?oldid=489595"
Category:
Cookies help us deliver our services. By using our services, you agree to our use of cookies.