The Survival of the Fittest 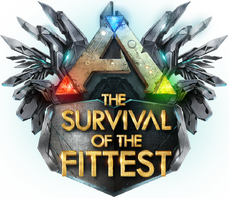 The Survival of the Fittest is a Battle Royale spin-off of ARK: Survival Evolved. The game is played in rounds and at much faster pace. Its goal is to become the last man standing by killing all other competitors on the island.

The Survival of the Fittest is played on several servers configured with special settings. The game takes place in an altered ARK at an accelerated pace, with most of the features deactivated to allow for a quicker game. For game balance, stats have been altered as tamed dinosaurs are no longer powerful, and as crafting does not function in this mode, most of the items found are found scattered across in supply drops found around the ARK. Almost like in the Hardcore mode, players cannot respawn on death or fast travel, but if they have any surviving tamed dino when they die as a survivor, the game is not over yet as they will take direct control; they lose if all the survivor and tamed dinosaurs in the tribe are killed/knocked down. Thereafter, they can still respawn as a spectator and go around and watch the game.

Specimen Implants means survivors cannot open their inventory as per usual, restricting them to up to eight items at a time. Any armor found in supply drops is equipped automatically, and disappears once the durability reaches zero.

The environment consists of The Island with slight modifications. At the start of every game, all players start off in a house on a

Quetzal that slowly flies in one direction, until they are (auto-)ejected to fly in a specific direction with a temporary

Sinomacrops (which despawns after landing). The area in which the players may move is restricted by barriers and gets smaller as time progresses (every three minutes), eventually forcing confrontation between players. Standing outside the zone will severely damage the health akin to implant instability of Extinction, both survivors and tamed dinos, until they get killed by it.

Note that Tek items do not spawn in this game mode, including those that do not require any boss Tekgrams. However, Tek creatures will still *rarely* spawn among their regular organic counterpart.

Currently the servers have the following game modes:

Most game mechanics are different compared to the vanilla game to compensate for the short duration of one round.

Changes from the old Survival of the Fittest

These dinosaurs exist in this mode:

Utility (only for a specific purpose)

These creature immediately die upon reaching 0 ×

The following loot is randomly found in drops

Retrieved from "https://ark.wiki.gg/index.php?title=The_Survival_of_the_Fittest&oldid=502023"
Categories:
Hidden categories:
Cookies help us deliver our services. By using our services, you agree to our use of cookies.