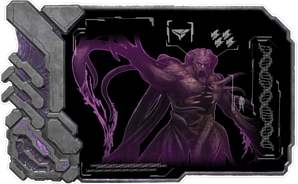 None
Habitat
Rockwell Arena, accessible via the Obelisks and/or the Terminal on Aberration

Rockwell is the Boss in ARK: Survival Evolved's Expansion Pack Aberration and one of the two primary antagonists of the ARK storyline. He was one of the few explorers who had written Explorer Notes containing recipes before he went insane "ascending" with his Edmundium (simply known to villagers as

Element) experiment, as evidenced by his notes.

The place to activate the teleporter to the Rockwell Arena depends on currently unknown conditions. For some players only the Terminal shows the summon icons, the survivors can see them also in the Obelisks on the surface or in loot crates.

When the survivor enters the Rockwell Arena, Rockwell's tentacles will attempt to attack them by slamming into the ground, electrocuting the ground, and shooting balls of energy at the survivor and their tames.

This former explorer is a humanoid monstrosity. He is gargantuan in size, ranking second largest in game. His limbs and hair have been replaced by many tendrils with the larger tendrils possessing wicked spikes presumably made of bone. His face is an equal atrocity with one half still resembling a human face whilst the other half is covered in element filled veins topped off with overgrown fang like teeth. His torso is more or less a guard box for his only surviving organ, his heart, that acts as a pump for his element filled veins that are present all over his body.

He stands at 142 meters tall, with his tentacles being 160 meters long on the surface, and he weighs 52,236 metric tons.

Rockwell was one of the survivors from the story of ARK. He was Helena's closest friend on the Island due to their common passion for science and tea along with their specialties helping the various tribes on the Island. When referring to his past life, he seems to be from 19th century England during the Victorian Era due to his knowledge of hunting creatures from Africa and India since areas of Africa and India were territories under British authority during the time. In the Island's tribal affairs, he settled uneasy tensions among the tribes as he was the leader of his neutral tribe that is well respected by other Island tribes. In terms of science on the Island, Rockwell doesn't hesitate to snatch unsuspecting survivors to use as test subjects for his Rockwell recipes. Also, he was the first survivor to discover an artifact and hired the Island tribes to gather the artifacts.

When Helena went to an obelisk on the Island with Mei Yin without sending Rockwell a letter of wanting to join, Rockwell's trust was shattered when he saw her in New Legion custody. When Rockwell entered the Island's Tek cave, he gained an obsession with Element. As he traveled the arks, he became more unstable until he eventually became the Overseer of the Aberration ARK by injecting himself with liquid Element, while having the desire to mercilessly give survivors a painful death. When the Aberration ARK fell onto Earth, Rockwell makes plans to gather an army by making the Genesis Simulation a factory for generating survivors that rally to his cause, he corrupt a part of the genesis ship and create his own creatures like the Shadowmane and the Noglin, his goal is to conquer a habitable planet to corrupt it like the corrupt ring of the ship.

The Rockwell always spawns with the same color scheme and has no color regions.

This means it is currently impossible to make alterations to the Rockwell's colors.

The following items are needed to open the Aberration Portal:

Uses these commands to give yourself all the items needed for tribute:

Rockwell stands inside the middle of the arena with a single path to him, surrounded by both his tentacles and a pool of inaccessible pure molten Element. While his tentacles are up he can not be harmed. The arena is not irradiated, because of this, feel free to bring any armor better than hazard suits to ensure survival.

Destroy each of his tentacles before being able to attack his stunned body. Rinse and repeat until he is dead. The more mounted survivors fighting, the better the odds.

When the tentacles begin their AoE shock/dismount attack avoid it immediately and wait it out. It has a short wind-up and charge-up indicating when it's about to start. The attack can also be canceled if the tentacle is destroyed.

Nameless will begin spawning in, with a strong mount these can be dealt with.

Plant Species Z Fruits are not recommended as you can accidentally dismount and blind yourself with them.

Charge Lantern could also work, however they are unreliable and inefficient when compared to any of the four lantern pets. You can use Meks to kill Rockwell but to get the Mek in you have to throw it out of the cryopod when you hear the whoosh of the boss fight .

With the utilization of

Cactus Broth you are able to do the entire boss fight on foot. Both Reapers and Nameless ignore you(unless you come too close to them) and you are able to clear the tentacles entirely with shotguns.

Pump-Action Shotgun with more then 230% damage, with 400 bullets each. You won’t use all of your ammo, but keep in mind, Reapers and Nameless may still attack if they come too close to you, so it’s best to plan for that with extra armor, bullets, and a charge pet(this won’t affect the cactus broth unless the tame is thrown down).

For higher difficulties, you could be looking at needing not only 3-4x as much ammo, but more armor and weapons as durability will be used up quickly.

Bring standard food materials and any buffs you think will help you.

When you are fighting Rockwell, you can fight him from one position at his front. You can shoot all of the tentacles(on gamma taking between 3-4 shots each with 230% damage) and then shoot him in the chest. There is no need to run around the arena to shoot the tentacles as the barrier that blocks you from falling into the molten element does not affect projectiles. (You might need to run around a little bit to hit the ones behind him, so don’t except not using stamina)

This strategy can be considered cheaper than with tames as you're only risking items, which can be farmed without spending days raising

Rock Drake or Reaper. Plus, you don’t have to deal with bunches of creatures chasing after you for the entire fight.

• If you wish, instead of using defensive armor, you can use a full set of

Ghillie Armor to reduce your detection range from 12 meters(which is an effect of cactus broth) to 6 as ghillie halves your detection range. This can be used to help deal with nearby creatures if one is anxious of the such. But this does come with the added risk of less armor, but high quality ghillie might still help and have decent protection. But because of durability this is risky.

Edmund Rockwell has only one weakness to his health: His heart. It becomes exposed after all the tentacles are killed momentarily.

Elemental Reaper Kings are weaker than their other wild counterpart, making them very easy to kill. Despite this, to be able to kill them effectively, they must be affected by charge light.

Nameless spawns disregard presence of other enraged alphas, and transforms into them after a while. Unlike the ones outside the arena, these do not call for Subterranean Reaper King. Despite this, it's best not to underestimate them due to their swarm.

Other than his tentacles and his inability to move around, he does not possess any other weakness.

There's an encoded message on the teaser dossier, which uses the same code as in Ascension. The message decodes to