Player vs. Player (also known as PvP or PvPvE) is a mode where players are able to deal damage to or kill each other. In PvP players can also damage or destroy another tribe's buildings or kill their dinos.

By default, PvP is enabled.

Player vs. Environment (PvE) is a mode where players are unable to directly damage another player. Players also can't damage other tribe's dinos or structures. However, there is a PvE demolish timer that allows destruction of other tribe's structures if no member of the tribe has logged in for a specific amount of time. Also, flying mounts are unable to pick up wild dinos in PvE. On these servers, the only threat to survival is the environment.

PvE is available as a Server Parameter at startup and by default is set to false. To change this parameter, the server has to be restarted.

PvX is a game mode exclusive to ARK: Survival Evolved Mobile. In PvX, the beaches of The Island are PvE while the middle as well as the Caves are PvP. A border will be visible in this mode outlining the areas of PvP and PvE.

This gamemode will be available on specific servers. 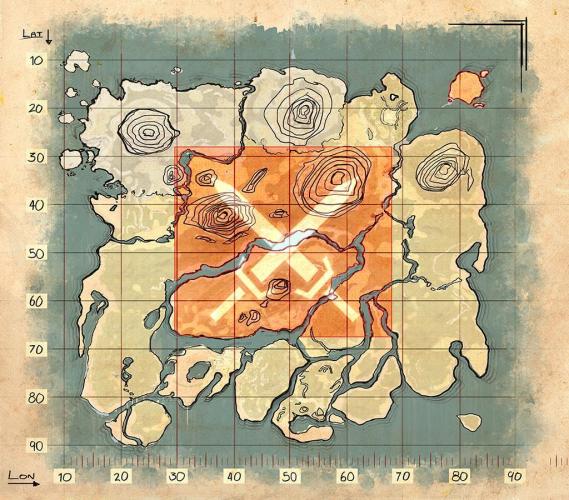 Both PvP and PvE game modes can be played in Hardcore mode. When a player dies in the Hardcore, they can not respawn and a new character must be created.

By default, Hardcore is disabled.

Both PvP and PvE game modes can be played in ARKpocalypse mode. On ARKpocalypse servers, the server resets automatically after a month, with an in-game countdown and dramatic meteor impact.

By default, ARKpocalypse is disabled.

This gamemode takes place at a faster pace, as it has multiplies all rates (harvesting, taming etc.) x3. This mode is very good for new players or people looking to play for a short period of time.

Speciality servers are alternate game modes that last for a limited amount of time. Each new theme will bring on a new set of challenges different from that of servers currently available.[2]

Small Tribes servers are a type of specialty server that limit the tribe size to 6 players and alliances are not allowed. Server rates are 3x (harvest, taming, experience) and are not be affected by Evolution Events. They also have 2x maturation, 2x egg hatching, 2x gestation and 50% reduced mating interval.[3]

Both PvP and PvE game modes can be played in Primitive mode. When Primitive is enabled, the engram skill tree is missing everything from the advanced/modern tier except for saddles. High tier gear and structures are disabled. This includes fabricated items, all ranged weapons (excluding crossbows, Bows, and slingshots). The Primitive Cannon is also not able to be used in primitive servers. By default, Primitive is disabled.

Survival of the Fittest

Survival of the Fittest

Survival of the Fittest was a special game mode that was introduced to Ark in Patch 200.0 and is now a standalone game. Its gameplay heavily differs from normal gameplay. The goal of the game mode is to become the last man standing by killing all other competitors on the island. In Survival of the Fittest, the game settings are modified to fit a faster paced style of gameplay.

Survival of the Fittest takes place on special servers.

Single Player is a mode that allows survivors to play ARK offline as singleplayer. On the xbox one s and one and ps4 pro and normal you can use the splitscreen function to play with a friend.