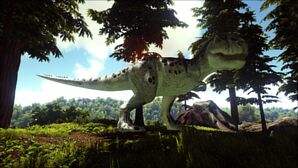 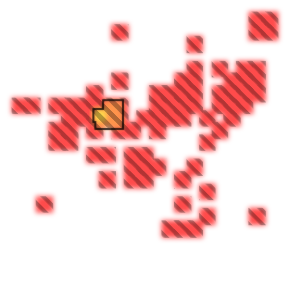 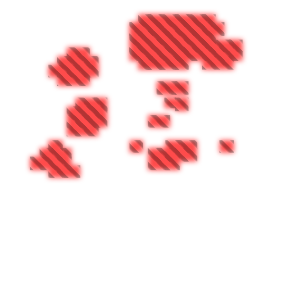 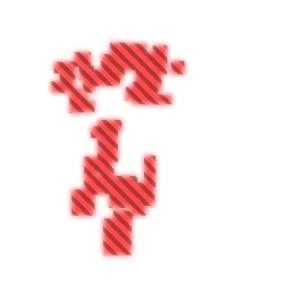 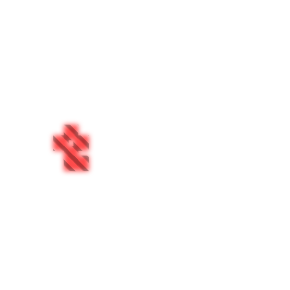 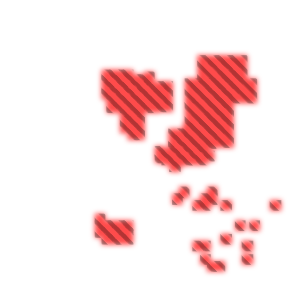 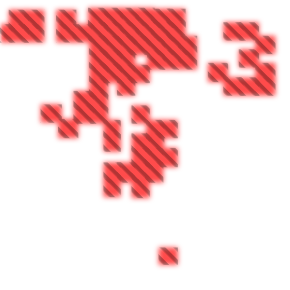 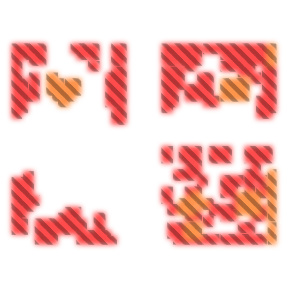 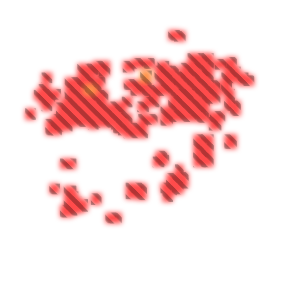 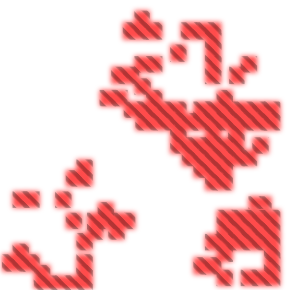 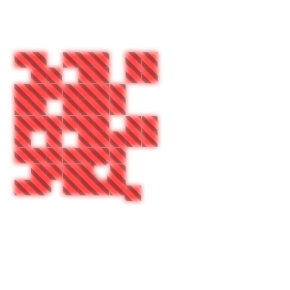 The Alpha T-Rex is a bigger, stronger version of a Rex which rarely spawns towards the inland areas of the island. In addition to their own strength, they also buff the damage and resistance of any nearby wild carnivores. They pose a significant threat to any players who aren't fully prepared to encounter one. Alpha Creatures cannot be knocked out. The best way to kill one of these beasts is by using a strong

Argentavis with points put into Health, Melee Damage, and Stamina. Use

Raw Meat to heal them in the battle. You can also use a

Raw Meat when harvested. Instead, they give very large quantities of

Rex, aggressive to anything around it. They move extremely fast and do large amounts of damage. This makes fleeing from one difficult, so it is not advisable to get into a fight with one unless you're prepared to see the battle through.
They can easily destroy non-metal buildings, so it is not advisable to hide from or fight one from inside your base if it is not built to withstand one. 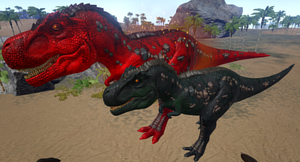 The Alpha T-Rex is about 1.5x the size of a normal Rex with a more limited color palette, but with bright red added (mostly Black/White/Red combinations). They also have a glowing red aura surrounding them, making them easier to differentiate from their normal counterparts.

This section describes how to fight against the Alpha T-Rex.

The Alpha T-Rex is one of the most powerful creatures in ARK: Survival Evolved, though not as powerful as the

Titanosaur or a wild

It is completely up to the tribe members or player on how they approach the task of killing an Alpha T-Rex. Teams have been able to use complicated systems to kill them, while others have gunned them down in a barrage of gunfire. The choice on how to do it is the player's, but you can find some suggestions below.

One tactic involved using a high damage ranged weapon like a mastercraft Crossbow or Compound bow with metal arrows. This method can easily take down an Alpha Rex. Lure the Rex to a dead corpse and then start firing at the Rex. Ensure that the corpse is not eaten by another carnivore or the Rex will charge right at you and could kill you and any creatures you have with you.

Luring the alpha rex to a corpse, and then positioning yourself with an

Argentavis (This can be difficult, stop when you're about to be on top of it.) allows you to spam attack on the rex without gaining aggro. Make sure to use a high level imprinted argentavis to speed up the process and reduce the amount of times you have to land for stamina.

A similar process can be done with the

Thylacoleo, where you lure the alpha to a corpse and repeatedly jump near the alpha's tail while attacking. This is much easier for all levels due to the thyla's percentage damage bleed.

Another easy strategy is to use a pack of

Allosaurus. Let the alpha Allosaurus use it's gore attack to slow the Alpha T-Rex down so it can be continuously attacked before reaching your tames.

A second tactic which only works on The Center, involves carrying a small herbivore such as a

Phiomia in the claws of an Argentavis and lure the Alpha T-Rex into a lava stream where it will slowly lose its enormous health pool. When you see its health dropping low, just pull it on to safe ground and finish it off with the Argentavis. This strategy just requires some patience, and you should have an eye out for his injuries so he won't die in the lava, otherwise you will lose all the loot and XP. Also, be careful not to fly too close to the lava, as this would kill you in seconds and you would probably lose your flyer too.

A third, far more dangerous tactic is possible because the Alpha T-Rex's attack range is, like the Rex, still shorter than the attack range of a

A wyvern, crystal or otherwise, can kill the alpha t-rex by utilizing the same strategy of the Thylacoleo but using their respective breaths while in range.

A high level tamed Reaper king is a potent enough mount that a 100% imprint, 30k hp, 600 melee beast can demolish an alpha 150 rex and suffer at most, 7k damage. Their natural armor, heavy hitting, fast hp regen and imprinted damage resistance make them a prime creature for taking out nearly any land dino that isn't a wild giga. In addition, they will harvest copious amounts of raw prime meat, and after a brief 10 minute break can jump back in to dealing with overspawned Alpha Creatures.

Megalodon) then lead the Alpha T-Rex into the deeper parts of the water and use the aquatic mount to kill it.

In an upfront battle, the only dinosaurs that stand a good chance against an Alpha T-Rex are the

Giganotosaurus and the Reaper or a very damage-oriented, imprint-boosted

Therizinosaurus.If you have a Giganotosaurus (with or without a saddle) and a Spyglass, you can order your Giganotosaurus to attack the Alpha T-Rex. Several Gigas can slay the alpha in seconds. However, something to keep in mind is that while a Giga has stronger base stats than an Alpha T-Rex, the Alpha Rex's stats go up a lot with each level.

A fourth tactic includes making good use of an armored platform saddle. Tribemates manning siege weaponry such as a Ballista Turret or Minigun Turret, using a high-level

Brontosaurus, can stand a good chance against a lone Alpha T-Rex. Have the driver make good use of the Brontosaurus' reach to juggle the Alpha T-Rex back while the gunners unload on it. This is not recommended with the

Another tactic is using a strong

Woolly Rhino's charge. A strong charge may be able to kill one in 1-4 attacks.

Another strategy to create a row of

Plant Species X Plants. They are easy to build and maintain, and do considerable DPS when there are many of them. 20 Plant Species X can take out a level 1 Alpha T-Rex within 10 seconds. If the T-Rex is aggroed on a flying mount such as an

Argentavis, you can lure the Alpha around the plants for it to die. The main downside of this strategy is that, unless you manage to get the last hit somehow, you will get no Experience for killing the Alpha in this way. You will still get the loot, however.

Use mounts, or ranged weapons. Any physical confrontation is almost always certain death.