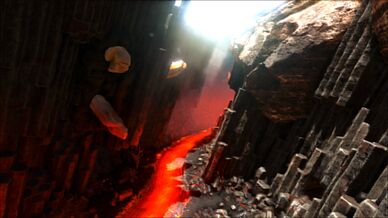 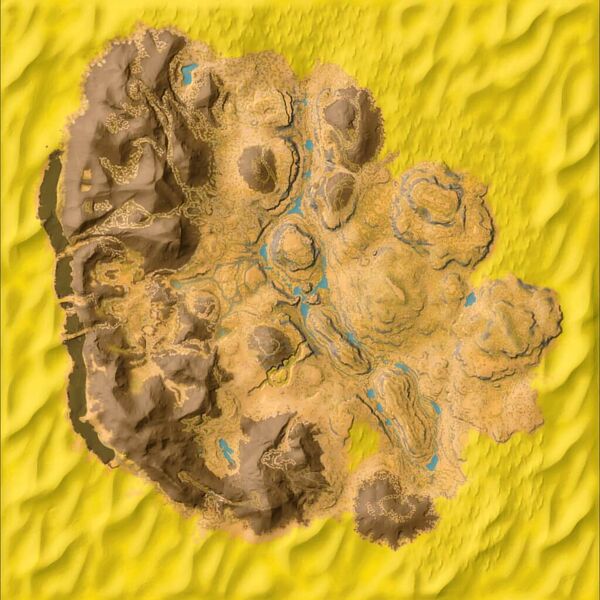 This Wyvern-filled trench is where players can find

Wyvern Eggs, which will allow them to raise their own

Wyverns. When traveling in The World Scar, various recesses can be found in the wall, some of which will contain a nest with an Egg. The element of the Wyvern within can easily be seen from a distance based on the Egg's color - red for fire, blue for lightning, and green for poison. Once an egg is taken, any nearby Wyverns will immediately become aggressive towards the player that took it.

The World Scar lies to the far west of the Desert Map as a treacherous chasm between the mountains and the sand dunes. Also nearby are the Red and Blue Obelisks.

The World's Scar possesses large quantities of both crystal and metal ore, should one be daring enough to farm it. The crystal nodes drop over 150 crystal, base gathering, per node. Metal spawns in extremely large clusters of both high density and normal density with up to 20 nodes in reach of each other at once!

A recommended farming method would be to clear out the area by stealing an egg and farming the open resources. For more risky players, perhaps just keep an eye out for approaching

Wyverns? Both desert cloth armour, or improved ghillie armour, alongside 30+ fortitude will be required to withstand the heat long enough to farm the materials. This goes without saying one should bring reserves of water as temperatures rise to approximately 60 degrees C, and about 100 degrees C, during a heatwave.